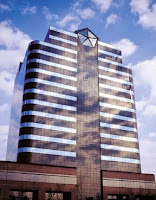 Recently a friend invited me to visit her at work–the Chrysler Headquarters in Auburn Hills, Michigan. I hadn’t been to Chrysler since my brief employment following college graduation. Those were the pre-Auburn Hills days, when a person could walk into the main building, tell the front desk you were applying for a job, fill out the app, get tested and hired all in one day. I never once pulled out my ID to prove who I was. My word was good enough.

I must admit I was a bit overwhelmed at the new headquarters. First, I had to have an official invite from my friend. When I entered the building from the “Visitor Only” parking area in the garage, I had only one choice of direction–the “up” escalator that deposited me into a huge imposing lobby blocked by a security desk that ran the width of the room.

The security agent behind the front desk told me to enter my name on the computer in the kiosk to see if I was “in the system.” Funny – I’ve always thought being “in the system” was a bad thing. But here, it was good.

Yes, indeed, there I was. In the system. I inwardly smiled when my name appeared on the screen. Then I saw a flash of light as the computer camera took my picture which would be sent to my friend who would verify that I was indeed the person she had invited. I just hoped she could recognize me by my forehead because that’s pretty much what the camera captured. “Do you want a retake?” the security agent asked. “Nah,” I replied. “I’m sure it’s not going into the yearbook or anything embarrassing like that, is it?” No response.

She handed me a lanyard with a visitor badge that I had to wear at all times. It was my ticket into the secure part of the building. It was also my exit pass. For a brief moment I panicked–What if I inadvertently lose the lanyard? Do I remain the property of Chrysler forever? Then I remembered the picture of my forehead which was now probably a permanent part of the intellectual property of Chrysler. Surely they’d release me once they matched my face to that section of my head.

“Have a seat and wait for your host to come and escort you in,” the security agent instructed. As I waited, I watched the comings and goings of other visitors. No one was allowed in without an escort who met them on the “secure” side of the desk. And everyone was escorted back to the security desk when their visit concluded. The security guard searched backpacks and briefcases of exiting visitors.

When my friend arrived, I couldn’t enter until I scanned my visitor card. The computer recorded my entrance time. After our very pleasant visit and brief tour of the building, my friend escorted me back to the front lobby where a second security guard asked for my lanyard. If I was who I said I was, the security door would release me and record my time of departure. From that point, I only had one choice–take the “down” escalator back to the security of the visitor garage.

Several years ago entering and exiting the Chrysler Headquarters was a breeze. I worked in the legal department and we didn’t even carry ID badges. Today we’re scanned as we enter, searched as we exit, and then reposited to the parking garage. “Thanks for stopping by. Now leave.”

At what point did Chrysler have to implement such extreme security measures? Possibly when a trusted employee stole a confidential document or some intellectual property–or maybe when a visitor trespassed into a restricted area. Chrysler doesn’t have anything to hide. But they do have a lot to protect–and understandably so. It’s unfortunate that the misdeeds of a few people affect everyone else.

Sometimes we’re tempted to make ourselves as secure as the Chrysler building. We block out anyone who tries to become close because years ago one person stole something–one person trespassed where they shouldn’t. Granted, some people are unhealthy and dangerous and we should protect ourselves from them. However, not everyone should pay the price for the misdoings of one–or even a few.

Maybe we need to look past the bad photo of the forehead and see the bigger picture by looking people in the eye again. It’s worth removing unnecessary barriers if trust can be restored.

Presbyterian minister Frank Crane said it best – “We’re never so vulnerable than when we trust someone – but paradoxically, if we cannot trust, neither can we find love or joy.”